Iowa City Owl Political News and Opinion
Aug 19, 11 at 5:55pm | Nathan D. Kerns
A loose coalition of community organizers, peace activists, and supporting organizations have called on volunteers to join them October 6, 2011, for an “occupation” of Freedom Plaza in Washington D.C. 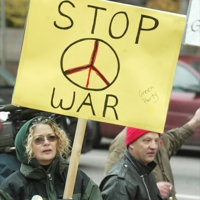 Some anti-war protestors from 2007.
Participants will be working in an effort to curb government policy in, what they claim to be, the favor of “human needs, not corporate greed.”

Experienced community organizers and peace activists, the majority of whom are from the Washington D.C., Baltimore, and New York areas, have organized a peaceful occupation of Freedom Plaza in Washington D.C. starting October 6, the 10th anniversary of the invasion of Afghanistan. Planners have acquired a four-day permit for the event, but have stated their intention to occupy the space nonviolently, until their demands are acknowledged.

Organizers of the Freedom Plaza occupation intend to establish a tent city in Washington D.C., about a quarter-mile away from the White House, which some are equating to the tent city created in Tahrir Square during the recent Egyptian Revolution, in support of democracy, to persuade American representatives to conform their citizens’ will in a nonviolent manner.

Dr. Margaret Flowers, a former Congressional Fellow for the Physicians for a National Health Program, a current board member of Healthcare-Now, and one of the many organizers of this rally, told the Owl: “Our hope is that the police will be nonviolent. We will do what we can to hold the space nonviolently. If we cannot, we will retreat and occupy another space in D.C.”

The people putting this event together are not part of a specific organization, and their website claims they are not trying to form any political entities. Their website states the group is a collection of individual activists seeking financial and political endorsements from various supporting political organizations. Individual donations are the primary source of of income for the event.

“The Veterans for Peace Action Network has donated the greatest amount (comparable to other organizations) and is the only organization so far that has made a monetary donation. We are selling t-shirts to raise funds and organizing fundraisers. All of the organizing, videos, website work, graphics, etc. is being done by volunteers,” Dr. Flowers explained.

Coordinators are urging participants to sign a nonviolence pledge, and to use art, music, theater, and education in an orderly effort to mend a broken political system. They say their initial goal is to eliminate corporatism and militarism in America.

The group has recommended volunteers plan and pack for a potentially indefinite stay in Freedom Square.

In May of 1968, as part of the Poor People’s Campaign, the last effort led by social movement organized by Dr. Martin Luther King Jr. before his assassination, a shantytown was erected in Washington D.C., occupied by a melting pot of the nation’s poor, to encourage economic and political reform. The shantytown, dubbed “Resurrection City,” was not successful. By the end of June, 1968 the federal government had moved in with bulldozers to raze the tent city, warning occupants to stand aside or be crushed, their demands unmet.

Kris O’Brian, a concerned citizen, and idealogical supporter of the October 6th event, explained his skepticism: “If it’s just to bring the troops home, I don’t think that would be too much to ask; But to start to tax the rich and all the eco-friendly things along with the other demands might be too much all at once. I think they should ask for only a few very accomplishable tasks first.”

Organizers are have demonstrated that are planning for a long stay. Medical and legal services, from the National Lawyers Guild, will be provided on location, as well as water, and a limited food supply. Organizers also plan on providing nonviolent resistance workshops during the occupation. Coordinators have stated that there are volunteer jobs available for participants weary to risk arrest such as food, medical, and cleanup services.