Iowa City Owl
Oct 06, 11 at 12:57pm | Bruce Lapham
Occupy Wall Street started as an idea on an email list in Canada. Adbusters senior editor Micah White told the Vancouver Courier, “We basically floated the idea in mid July into our [email list] and it was spontaneously taken up by all the people of the world. It just kind of snowballed from there.” 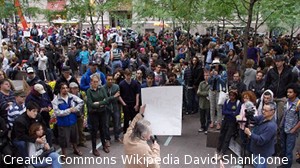 Crowd at Occupy Wall Street
Constitution Day was suggested as the date for the kickoff. The hacker group Anonymous spread the word. Eventually there was a website, weekly meetings, and an idea became a movement. On Saturday, September 17, protestors arrived at Zuccotti Park and began reminding passers-by of its former name, Liberty Park.

The movement has taken its inspiration from the Arab Spring protests. The protestors have no clear list of demands. There is no single leader. Participants are using Facebook, Twitter, and other social media to spread their message.

The movement was mostly unnoticed by the media until September 24. That was the day of the now well-known pepper-spraying incident. As protestors marched from Zucotti Park to Union Square, three women were corralled by the NYPD in a move called kettling. While the women were standing within a barrier made of orange plastic fencing, an NYPD officer used his pepper spray on them. A video of the incident quickly hit YouTube. Activists soon discovered the name of the officer involved and began asking the general public to write the NYPD and complain.

Initially the NYPD said that Deputy Inspector Anthony V. Bologna had acted appropriately. DI Roy Richter, head of the Captains Endowment Association, defended Bologna, stating that his “…actions that day were motivated by his concern for the safety of officers under his command and the safety of the public.” Since then, the NYPD Internal Affairs Bureau has opened an investigation into the incident.

On October 1, the protestors staged a “March on Brooklyn Bridge.” During the march, many of the protestors ended up walking on the roadway blocking traffic. NYPD arrested over 700 protestors. Some protestors said they were purposely led into the roadway by police officers. Others maintain that the police were simply backing up. The NYPD says they gave protestors several warnings to stay on the sidewalks before beginning to make arrests.

On October 5, the protestors gathered in Foley Square and staged a march on Wall Street. Prior to the march, several unions gave official support to the movement. Among those joining the ranks of Occupy Wall Street were members of the AFL-CIO, UAW, the Professional Staff Congress of CUNY, the United Federation of Teachers, and National Nurses United. There were reports of some protestors getting out of hand, some use of pepper spray, and kettling of Liberty Square.

The movement has grown beyond NYC. Boston, Chicago, and Los Angeles have seen large-scale protests. Iowa is not far behind. Occupy Iowa plans a demonstration for Friday. The planned protest will coincide with the Rally to End the War in Afghanistan. Occupy Iowa members will then march to College Green Park at 6 pm. Occupy ISU will be meeting today in the middle of the Ames campus at the Campanile. Des Moines will see its own rally on Sunday at noon in People’s Park.
Please login to post.