Iowa City Owl World News
Aug 13, 11 at 7:00pm | James Beck
The death of 29 year-old Mark Duggan in the Tottenham borough of London domino-ed into almost a week of widespread rioting, looting, and arson in London and several other cities from August 6th until August 10th. The alleged crack-cocaine dealer and gang member was shot in the chest by a policeman on August 4th, leading to a non-violent protest march of 200 members organized by friends and family of Duggan. 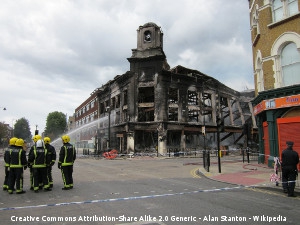 A store in Britain destroyed by fire during the riots.
A march on August 6th of over 200 people, including Dugan's friends and family, beginning at Broadwater farm and ending at Tottenham police station, was peaceful at first but began to get rowdy when no senior police official came to speak with the group. By nightfall, disorder erupted with the burning of the Tottenham post office by what was described as a gang of youths. Late in the night, attacks were carried out on riot police, cars, and a double-decker bus. One major retail business was looted until dawn without police interference.

On August 7th similar clashes with police and hooded youth occurred in the London neighborhoods of Enfield, Brixton, and Wood Green. A Brixton Foot Locker was set ablaze, game shops, electronic stores, and clothing stores were also the targets of looters. By the next morning, eight other London cities reported similar looting, arson, and violent riot police clashes.

By Monday August 8th, widespread looting was occurring in scores of cities in the London area as well as in other cities in Britain. In Birmingham and West Bromwich youths rioted, looted local businesses, smashed shop windows and set cars alight. There were 130 arrests. Bristol and Leeds also reported rioters attacking shops and even the death of 34 year-old Gavin Clarke from an armed guard. In Liverpool, Medway and Nottingham, rioters confronted police, attacked a police station and ignited cars.

As of August 13th 2275 people have been arrested in England due to the looting and rioting, of which about 1000 have been formally charged. Vehicles, homes and shops were attacked and damaged leading to the expectation of £200 million worth of damage according to The Association of British Insurers.

Since the events, the political, legal, and press responses have been consistent in condemning the acts. Prime Minister David Cameron condemned the "sickening scenes of people looting, vandalising, thieving, robbing" and told rioters "You will feel the full force of the law. And if you are old enough to commit these crimes, you are old enough to face the punishment." Newspapers such as The Guardian and The Daily Telegraph called on the public to condemn the violent disorder whose main intent was criminal.

But according to mostly-internet sources, the riots are a glimmer into the Birtain's rich/poor disparity. The arguments by protest supporters suggest that Duggan's death was a symbol of societal injustices, giving people an idea to rally around. WorldNews calls it a result of "a large neglected youth culture," in which youth have been left without recreation centers, job training, or youth clubs. Supporters say these disparities fueled the riots and opportunism, with Duggan's death providing only the spark.

Other still ask, "why?" What caused the sudden violent unrest in Britain, and a country of previously law-abiding citizens to steal? While none deny the unlawfulness of the acts, many do debate the underlying reasons that compelled people to act unlawfully. The debate has divided commentators into predictable sides – conservatives smoldering from the acts of "mindless violence" and critics on the left blaming mistrust of police in poor communities as well as income inequality.

As more details of the crimes have surfaced, however, the causes have become a bit more complex. In many of the cases, the crimes seemed to base in split-second opportunist decision-making. One man’s lawyer said that the reason why he stole a bottle of water was because he was thirsty. The youngest arrested was an 11-year old whose alleged crime was stealing a trashcan.

Others joined the riots and looting after previously being passive observers. One woman stole an armful of coconuts and another man, suddenly emboldened by the rioting grabbed a box of pears outside of a convenience store. Clifford Stott, a social psychologist at the University of Liverpool who studies riots says that this sort of behavior is not that uncommon when bystanders get caught up in a broad crackdown by police.

Others have blamed the social media for encouraging the rioting. Social networking allowed for easy communication for youth to mobilize at gather momentum during the worst of the looting and violence. Some even blame Blackberry’s BBM messaging because of the anonymity allowed in sending messages making it hard for police to track instigators. People have responded that these tools have been available to the police as well, allowing them to warn neighborhoods and rally clean support.
Please login to post.